UAE Video Surveillance Market report thoroughly covers the market by components and applications. The report provides an unbiased and detailed analysis of the ongoing market trends, opportunities, high growth areas, and market drivers which would help the stakeholders device and align their market strategies according to the current and future market dynamics.

UAE video surveillance market has registered high growth over the past years on account of several government initiatives such as the Dubai Smart City Initiative, National Plan 2020, and Vision 2021. However, due to the outbreak of COVID-19, major construction projects came to a halt, which negatively impacted the demand for surveillance cameras in 2020. Although, as soon as the lockdown was lifted, the market started recovering from the losses and the market is expected to grow in the future on account of growing security concerns and the increasing crime index in UAE. 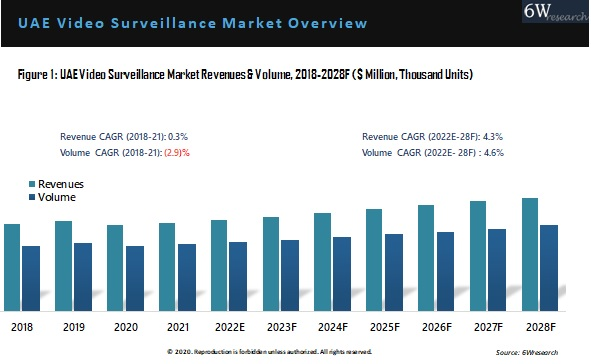 According to 6Wresearch, UAE Video Surveillance market size is expected to grow at a CAGR of 4.3% during 2022-2028. Several infrastructural projects such as the Dubai Metro, Abu Dhabi metro, construction of new retail malls, and a number of residential and commercial projects are in pipeline under these initiatives, boding well with the growing demand for installation of video surveillance in these facilities during the forecast period. Surging investment towards the advancement of technology in the surveillance industry is accelerating the development of the market. Rising infrastructure development coupled with an increasing number of residential and commercial projects is accelerating the growth of the market.

In 2021, within applications, government and transportation verticals have generated the majority of the market revenues, and the same trend is expected to continue in the forecasted years owing to the rising level of investment toward various construction projects such as shopping malls, airports, and metros such as Dubai Metro, Abu Dhabi metro, burgeoning deployment of video surveillance in public areas to ensure safety and diminish crime rate and increase in infrastructure development activities. 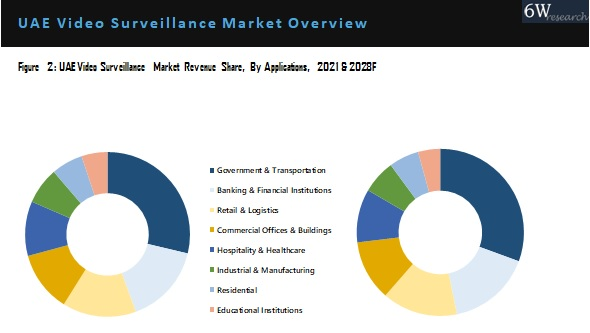 Key Attractiveness of the Report

Key Highlights of the Report

The report provides a detailed analysis of the following market segments:

UAE Video Surveillance Market is expected to project substantial growth owing to the growth in the construction market. Upcoming new hotels & shopping malls coupled with growing stringency in government regulations regarding the compulsory installation of video surveillance systems in public areas would bode well for the UAE video surveillance market Growth. The increasing inflow of FDI in the construction and retail sectors are some of the key factors that have also resulted in the growth of social infrastructure in the country. Additionally, the market is expected to gain more momentum during the forecast period owing to several developments in the surveillance market in UAE as a part of the Dubai Smart City Initiative and Vision 2021.

According to 6Wresearch, the UAE Video Surveillance Market size is projected to grow at a CAGR of 4.0% during 2019-25. In 2016, the video surveillance market in UAE declined due to falling government spending owing to declining oil prices. However, the market bounced back with the recovery of oil prices post 2017. Growing security concerns and increasing crime index in UAE are expected to boost the UAE Video Surveillance Market Share during the forecast period.

Amongst all verticals, the government & transportation vertical acquired the highest revenue share in the overall UAE Video Surveillance Market Revenue during the past few years. Over the next six years, hospitality & healthcare, and education verticals are forecast to grow at a high rate from 2019 to 2025. Dubai held a major market for video surveillance systems in terms of revenues in 2018, by region, owing to increased infrastructure development activities, especially in the commercial and residential verticals.

UAE videos surveillance market is anticipated to gain traction in the coming timeframe on the back of the rising growth of the hospitality sector. The growing tourist influx in the country has led to strengthening the growth and development of the hotels and restaurants and has widened the scope of product application in premises and parking areas as well. The growing expansion of food courts and shopping centers also proliferate the deployment of video surveillance is estimated to bolster the growth of the UAE video surveillance market in the upcoming six years.

Key Highlights of the Report:

• Historical Data of UAE Video Surveillance Market Revenues, By Types for the Period 2015-2018

• Historical Data of UAE Video Surveillance Market Revenues, By Verticals for the Period 2015-2018

• Historical Data of UAE Video Surveillance Market Revenues, By Regions for the Period 2015-2018

×
Go to New Report No! I want to read this
Pricing
Buy Now